There are a lot of places to live in the United States, and these places go by a lot of different names.

You may have heard of these before: county, municipality, city, town, township, village, borough, hamlet.

These are all forms of local government, and no they aren’t all the same thing.

In this article, we are going to talk about what each one is, what defines them, and how they are all different from one another.

We are also going to explore the difference between a town and a city, so keep reading.

How they are all related

They aren’t all the same thing, but they are all related in one simple way.

Counties, cities, municipalities, towns, and the rest are all forms of local government.

A local government refers to the governmental jurisdictional below the level of the state.

So what this means is a local government is any government that exists within the state.

Here’s a nice long list of all the types of local governments in the United States:

According to the 2012 census, there are 89,004 local governments in the United States.

The majority of states have at least two tiers of local government: counties, and municipalities.

There are exceptions to this rule of course:

At the highest level of local government, is the county.

48 states have counties, and the majority of them have governmental authority.

This is except for a few states in New England.

Rhode Island and Connecticut have eradicated the governmental functions of counties.

Massachusetts has removed most functions from 8 of its 14 counties.

Most counties have subdivisions including municipalities, townships or unincorporated areas.

Other counties function as a city and county in one.

There are currently 3,142 counties or county equivalents in the United States.

Most counties have city zoning laws, but some like Houston don’t.

The borough is a county equivalent local government found in the state of Alaska.

Alaska’s boroughs function similarly to counties in the other states.

These parishes function similarly to counties in other states.

The state of Louisiana is divided into 64 parishes.

41 of these parishes are governed by a council called the Police Jury, and the other 23 have other various forms of government.

There are technically two terms when it comes to boundaries in the United States, civil and survey townships.

The township that functions as a local government is a civil township.

The other is a unit of land measure that a civil township is often based off of.

A civil township is a type of local government that is in a grey area between counties and municipalities. 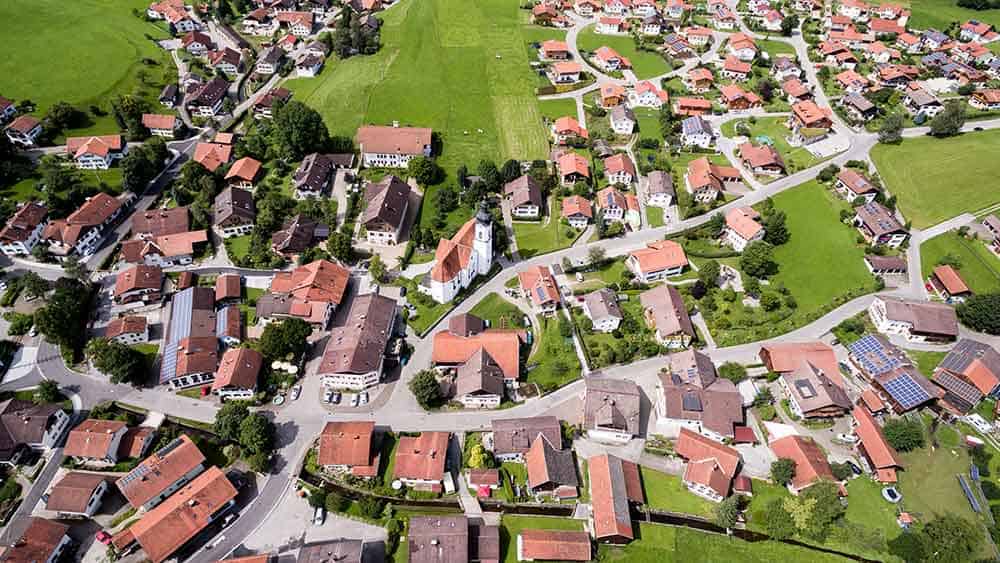 In many states, townships operate under similar laws as a county does.

In other states, they operate as municipalities, similar to that of a city, village, town, or borough.

There are currently 20 states with civil townships, and most are in rural areas.

A city is most likely the first thing you think of when it comes to describing the place you live.

A city in the United States is a municipality and is usually the largest of the bunch.

Think of the types of municipalities as a pyramid based on population; the city is at the bottom.

This means that they are incorporated, and have powers of self-government or jurisdiction.

In most states, cities and counties exist side by side, but in some states, they can exist independently, or together.

Cities that exist outside of the territory of a county are called independent cities.

There are 41 independent cities, 38 of which are in Virginia.

The other three are Baltimore, Maryland; St. Louis, Missouri; and Carson City, Nevada.

Cities that exist together with a county are called consolidated city-counties.

They have the powers and responsibilities of both a county and municipality. The definition of a city is pretty clear, but when it comes to towns, it’s a little more unclear.

The word “town” can have a different meaning in different states.

In some states, a town is an incorporated municipality that is smaller than a city, but larger than a village.

In other states, a town is just an unincorporated area that is part of a larger county.

Sometimes towns can be incorporated but have less than the population threshold set by the state.

Other times, the population of a town is much more.

Some states use the word town to refer to any populated place, while some other states don’t even use the word at all.

This is where the confusion lies when questioning the difference between a city and a town.

Alaska uses the term borough as the equivalent of a county instead of a municipality.

In Connecticut, the term borough is an incorporated municipality within a town.

In New Jersey, a borough is an independent incorporated municipality.

New York City uses boroughs to divide the greater city into five areas, each in a separate county.

Pennsylvania uses the term borough as an equivalent to a town.

Like a town and borough, the term “village” can vary from state to state.

Most of the time, you will either see a village as an incorporated municipality of its own or as a special district.

Villages can also have the informal meaning of a small human settlement.

They may also refer to small unincorporated areas in larger cities or towns.

Last but not least, is the hamlet.

In the United States, hamlets only exist in three states, New York, Oregon, and Mississippi.

In New York, hamlets are unincorporated settlements within a larger town. They aren’t legal entities and don’t have a government or official boundary.

In Oregon, a hamlet is a local government for small communities that allows them to organize community activities. They don’t provide services like utilities and fire departments, and they don’t have taxes or fees.

In Mississippi, a hamlet is referred to as a “municipal historical hamlet.” This term applies to a municipality of fewer than 600 people that lost its charter before 1945.

So what’s the big difference then?

One of the major differences between all the different local governments is size.

With that being said, there is a lot of confusion around what defines each local government.

This is because many of the terms are used in many different situations.

At the highest level (Regarding population) are the county and county equivalents.

These include counties, boroughs (Alaska), and parishes (Louisiana).

Next, comes civil townships. These are in-between counties and municipalities.

Counties are divided into civil townships, and only 20 states have them.

Next, comes the municipalities.

These include cities, towns, villages, and in some states, hamlets.

The Difference Between a Town and a City

Because this is the question I hear the most, I will compare the difference between a town and a city.

Many times cities and towns are considered to be the same thing, but they are not.

Keep in mind that the following info varies based on each case, since there is no set definition for either.

A city is a municipality, and usually the largest of them.

That means that it is incorporated and has powers of self-government or jurisdiction.

A city is always a city, but depending on what state you live in, the word “town” can have many meanings.

A town can be an incorporated municipality like a city, but it could also be an unincorporated area like a community or neighborhood.

Towns could be part of a larger city or just a reference to any populated place.

With that being said, if you want to compare a town (municipality) and a city, the main difference is regarding size.

Cities are almost always larger than towns. There are exceptions, but few and far between.

Cities often have a much larger variety of ethnicities when compared to towns.

They also have a wider range of different religions, races, and languages.

Cities often have a much higher population density and larger area than towns do.

On the other hand, towns may be similar to cities, but in smaller sizes.

They tend to be less populated with less diversity.

They also usually cover a smaller area than cities.

With a larger population comes a larger economy.

Cities tend to have bigger economies with a greater labor force and purchasing power.

Therefore, larger corporations and entities prefer to establish themselves in cities.

Cities also have a development plan that often leads to growth and often merging with nearby municipalities.

Towns, on the other hand, have smaller economies with smaller enterprises.

Often, there are no major employers, and the circulation of money is not as active.

When it comes to local government, there are so many different terms and definitions; it’s easy to get confused.

Cities are usually the largest municipality. Towns are typically smaller than cities, and villages are even smaller than towns.

Some states contain towns and villages, while some don’t.

Some states contain combined city-counties, while some states have cities that act as counties.

When it comes to determining the places, we live, and what defines them, this article hopefully cleared it up a little.

If you have any questions or responses to the information here, please leave a response in the comments below!

This site uses Akismet to reduce spam. Learn how your comment data is processed.